In our previous blog we pointed out some of the ’16-’17 Fall/ Winter fashion trends that will dominate this year and among them we presented you the true velvet, one of the most promising trends this winter season. After that, we can easily call this season: the “Velvet Season”!

Today’s blog is about its history and how-to-wear tips!

But first, what is velvet…?

It is a type of woven tufted fabric in which the cut threads are evenly distributed, with a short dense pile, giving it a unique and memorable feel. The word velvety means “smooth like velvet“.

They can make it from either synthetic or natural fibers. And they make it from several different kinds of fibers, traditionally, the most expensive of which is silk which is rare to find nowadays. Today, you will probably find it  sold as “silk velvet” which  is actually a mix of rayon and silk. Cotton is also used to make this garment but this often results in a less luxurious fabric. They also make it from fibers such as linen, mohair, and wool.

Because of its unusual softness and appearance as well as its high cost of production, it has often been associated with lordship. Velvet was introduced to Baghdad during the rule of Harun al-Rahid by Kashmiri merchants and to Al-Andalus by Ziryab. Did you know that Cairo was the world’s largest producer of velvet, during Mamluk era?

Furthermore, much of it they exported it to Venice (from where it begun getting famous to most of Europe), Al-Andalus and the Mali Empire. Additionally, they made many fine velvets in Turkey while Persia was famous for its beautiful designs and colors. They used gorgeous velvets in Europe in 12th and 13th century in religious and court ceremonials.

From the middle of the 18th century, we could find silk velvet mostly  in men’s apparel. While women’s fashion did not support it and turned into lighter fabrics. During the early 20th century, we saw this garment to play a vital role at opera houses. Protagonists wore glamorous velvet coats in various patterns. Now, we see it everywhere, in all its glamour but with a minimal approach which makes it a #mustfollow trend!

This type of fabric adds a dramatic and luxury touch to any outfit! Most of you may not dare to wear it, especially during day, but in order to feel comfortable we suggest you to start with small steps and discrete adds on. For example, try to combine a small velvet bag, or even a velvet hair bow. Then we suggest you to start combing clothes and one of them to be velvet, but not all of them at the same outfit! At no time you will be ready to wear a velvet dress and be magnificent with a feeling of confidence!

Find your inspiration from our new collection on dejavufashion.gr and find beautiful pieces that will definitely enhance your style! Try on our velvet lingerie with combat boots to give a rock touch your style! If you are in a more romantic mood, you will find adorable both our velvet dresses❣ 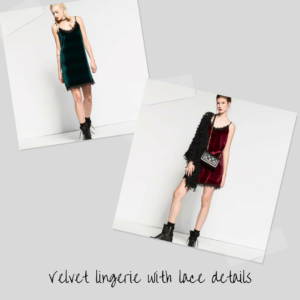 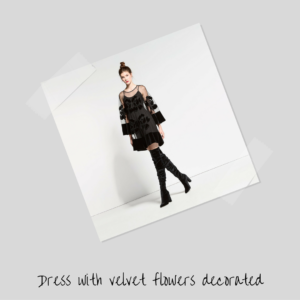 Don’t be afraid to experiment with different fabrics even if you think that those belong to another era, like velvet, a misunderstood garment… Hope that you found this blog post interesting and inspiring!

There are no comments